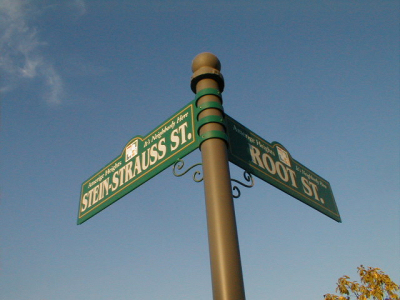 John Hetebrink was an early settler to the area. He was a successful farmer who made his fortune in the tomato, walnut and citrus industries. His residence, built in 1914, is still located at 1515 E. Chapman Avenue. His original ranch consisted of 40 acres north of Chapman Avenue. The Hetebrink family was involved with many community activities, and their residence was often the site of meetings, events and parties.

Albert Launer was a 1909 graduate of Fullerton High School and graduated from USC law school in 1914. He married in 1915 eventually settling and practicing law in Fullerton.

Root Street in Amerige Heights is named after former Fullerton Mayor Bob Root, who was instrumental in the redevelopment of the historic downtown and the founding of the Fullerton Railway Plaza Association. He moved to Fullerton in 1950 and was involved in the city from that day forward. He served on the City Council from 1968-76, was mayor from 1972-74 and was on the city’s Economic Development Committee.

Mr. Root worked in the aerospace industry until 1971. He then became a realtor with McGarvey Clark Realty where he was one of the company’s top producers for the next 28 years.

In 1985, he was honored as Fullerton’s Man of the Year, and in 1988, received the Rotary Club Most Ethical Businessman Award.

His lifelong love of trains and interest in the betterment of the community led Root to become the founding president of the railway association, an organization dedicated to bringing a train museum and destination attraction to downtown Fullerton.

He remained active until his death in 2008.

William J. Starbuck arrived in Fullerton in the 1880s and opened a drugstore – the Gem Pharmacy – on the south side of the 100 block of East Commonwealth Avenue. It was also the city’s telephone exchange, soda fountain, social center and general dry-goods outlet.

Starbuck was a member of the city’s first school board; he installed a bookcase in his pharmacy, stocked it with books and set chairs and a sofa nearby to encourage readers. He called it a “traveling” library, meaning people could borrow the books. It was the city’s first library. Soon others passed the hat to start a reading room above the bank downtown in hopes of luring boys away from saloons. The first municipal library opened in 1907, another in 1942 and the current main branch in 1973.