The speed limit within the Amerige Heights Community is 25 MPH or slower.

Amerige Heights contains a mix of public and private streets. For a map, click here.

NOTE: Overnight parking on public streets is prohibited in Fullerton unless otherwise posted

The City of Fullerton has begun to enforce their Overnight Parking Ordinance within the Amerige Heights Community. City law prohibits the parking of vehicles on public streets from 2 – 5 a.m. Amerige Heights is a mix of public and private streets. This ordinance applies only to PUBLIC streets.

The community has expressed concerns to the City for many months regarding excessive vehicle speeds, suspicious activities/persons and illegal parking. In fact, at the August 30th Homeowner Forum the public street overnight parking issue was raised during the Police Department presentation regarding Neighborhood Watch.

These concerns, combined with the population growth of the Northwest side of the community has caused the Police Department to create another policing “zone” in Fullerton. This added zone creates a patrol/enforcement emphasis in our section of Fullerton.

These concerns, combined with the population growth of the Northwest side of the community has caused the Police Department to create another policing “zone” in Fullerton. This added zone creates a patrol/enforcement emphasis in our section of Fullerton.

The Amerige Heights Community is NOT eligible for exemption of the overnight parking restriction.

A unique aspect of Amerige Heights that we tend to take for granted is the traffic circle. Did you quickly recall who had the right-of-way when you first approached the circle? Did it seem a bit out of place? After navigating the circle a few times you probably began to realize what a clever traffic control device it really is. Please be patient with visitors to the community who may be unaccustomed to them. 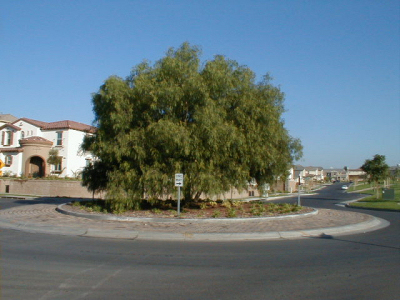 The first traffic circle in the United States was constructed in 1905 in New York City and was known as a “gyratory.” In its basic form, a traffic circle consists of a raised island at the center of an ordinary right-angle intersection. The island, which directs cars counterclockwise, is intended to reduce speeds and maintain a flow of traffic – no stop signs or signals are needed. The low curb allows oversized vehicles to pass freely. Here are the basic rules:

– Slow down as you approach.

– Look to your left and check to your right – for cars traveling in the wrong direction.

– Yield to traffic in the circle.

– When it’s clear, turn RIGHT into the circle and drive counter-clockwise until you get to the street you want to turn onto.

– Once in the circle you have the right-of-way. Do not stop except to avoid a collision.

– When you get to the street you wish to exit, turn to your right. Watch for and yield to pedestrians waiting to cross, or crossing the exit leg.